Shopper numbers increase by a third as lockdown eases

Shopper numbers jumped in England yesterday (1 June) as lockdown restrictions were eased in the country and car showrooms, outdoor markets and some stores – including Ikea – reopened.

According to Springboard, the number of shoppers jumped by 31% by 5pm on Monday compared with a week ago (which was a bank holiday). Across the UK as a whole, shopper numbers were up by 28% week-on-week.

The biggest jump was experienced in shopping centres, where footfall was up 37.8%, followed by high streets on 31.5% and retail parks on 13.1%.

“It appears that even though only markets and car showrooms have opened today in addition to essential stores, shoppers are heading back into bricks-and-mortar destinations,” said Diane Wehrle, Springboard’s insights director.

Primark will not offer ‘special discounts’ when stores reopen

Primark will not be offering “special discounts” when it reopens its stores on 15 June despite the chain having built up almost £2bn worth of stock – double its normal level.

The company, which is owned by AB Foods, has £1.5bn stock on hand plus a commitment to suppliers to buy another £400m. It normally holds stock worth around £900m.

The excess stock is mainly non-fashion and non-seasonal ranges although there is some excess from the spring/summer range. Some of the latter will be held back until next year while it expects the rest to be sold “in the normal course of business”.

It is widely expected that many retailers will have to offer steep reductions to offload excess stock after a slump in sales, particularly of clothing, during lockdown.

Heineken has appointed a new top marketer for its namesake brand, appointing Bram Westenbrink as senior director global of the Heineken brand.

Westenbrink has worked at Heineken for more than 15 years, latterly as vice-president of marketing for Heineken Brazil. During that time, he developed a portfolio strategy for its 16 brands, as well as building a completely new marketing team including a digital media hub. Under his leadership, Brazil became Heineken’s fastest growth and largest operating company.

The books were originally set to launch in time for the summer holidays to help children ‘chill’ in the back of the car during long summer drives. But the launch has been brought forward in recognition of the pressure parents feel to keep children focused on schoolwork and entertained during the coronavirus pandemic.

‘Little Chapters of Chill’ were created with Churchill’s agency Engine and written by children’s author and meditation guide Sue Pickford. The five audio books focus on the adventures of Churchie the dog, while teaching mindfulness techniques.

Churchill home insurance marketing manager Jane Morgan says: “Parents have been finding lockdown really difficult as they are under pressure to maintain their level of work while also educating and entertaining their children. At Churchill, we want to do whatever we can to help parents through this time. That’s why we decided to bring the launch of our audiobooks forward.

“Originally planned for the summer, to help kids chill in the back of cars during long drives, we felt the audiobooks could provide a little bit of peace and calm to both children and parents right now.”

Japanese food company Mizkan is launching a direct-to-consumer brand as it looks to tap into growing demand for healthy food options.

The brand – Zenb – offers a range of veggie sticks that use the whole vegetable, including the core, peel, seeds and stem. Already established in Japan and the US it is aimed at consumers-on-the-go as an easier way to eat vegetables while reducing food waste.

Mizkan decided to go ahead with the launch despite the coronavirus pandemic and lockdown in the UK. The launch campaign, created by Zone, is centred around a brand proposition of ‘Food rediscovered’

Zenb CMO Christiane Paul: “With the pandemic, we believe there is an even greater need for consumers to have snacking options they can feel good about. And these are delivered directly to your door, providing super-easy availability while working from home.

“We clearly adjusted our launch tactics recognising that it would take a while before consumers would spend significant time outside of their homes. As such we’re leaning on digital tactics to start, and planning for bigger launch, sampling and more experiential events later in the year.”

Brands from Nike to Netflix have been showing solidarity with global anti-racism protests following the death of unarmed black man George Floyd at the hands of US police officers.

Nike released a 60-second black and white ad – entitled ‘For once, Don’t Do It’ – asking citizens not to “pretend there isn’t a problem in America” and willing them to “become part of the change”. Created by Wieden + Kennedy Portland, the ad has already attracted more than 425,000 views on Nike’s YouTube page, as well as more than 200,000 likes and 90,000 retweets on Twitter.

Adidas quoted rival Nike’s tweet with the words “Together is how we move forward”, while Netflix tweeted: “To be silent is to be complicit. Black lives matter. We have a platform and we have a duty to our Black members, employees, creators and talent to speak up.”

Amazon put out a statement calling on the “inequitable and brutal treatment of Black people” to stop, adding: “Together we stand in solidarity with the Black community – our employees, customers and partners – in the fight against systemic racism and injustice.”

In the US, Google and YouTube homepages shared their support for “racial equality in solidarity with the Black community”, with Google CEO Sundar Pichai adding: “For those feeling grief, anger, sadness and fear, you are not alone.”

Elsewhere, Airbnb co-founder and CEO, Brian Cheksy, said he stood with “those using their voices and peacefully calling for justice, fairness and racial equality”. 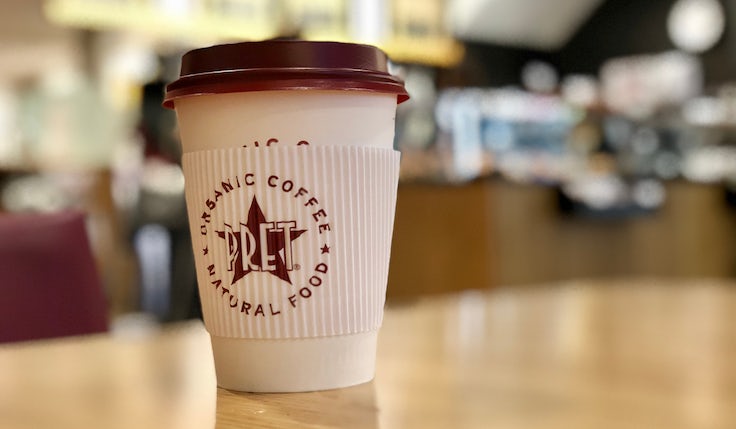 Pret A Manger is hoping to renegotiate rents in a bid to avoid store closures as it “radically” adapts its business model to adjust to life post-lockdown.

The chain, which plans to have reopened 300 of its 400 stores as of next week, is bracing itself for a fall in footfall as people continue to work from home for the foreseeable future.

The combination of declining footfall and high rental costs have put “substantial pressure” on the business, according to chief executive Pano Christou, who says there is a plan in place to address these issues.

“While Pret may look and feel a bit different in the short term, if we take the right steps today, we’ll make sure that Pret can thrive in the future,” Christou adds.

Nestlé has been forced to rebrand its plant-based Incredible Burger following a legal challenge from US meat substitute producer Impossible Foods.

A Dutch court ruled that the product, now to be known as the Sensational Burger, had infringed trademarks held by Impossible Foods and was likely to cause confusion. The court noted that Nestlé had originally approached Impossible Foods, which is not yet in the European market, about the possibility of a licensing or partnership deal in 2018, before revealing plans to launch its own product.

The judge stated that Nestlé appeared to have “tried to frustrate Impossible Foods’s entry into the European market by offering its own plant-based foods under a similar name”, the Financial Times reports.

Nestlé is prohibited from the use of the “Incredible” name in Europe and has four weeks to remove the old product from shelves or face a fine of €25,000 a day.

In the US market, Nestlé had already decided to call the product Awesome Burger, rather than Incredible Burger.

The company is appealing the decision, saying it is “disappointed” by the ruling as it believes “anyone should be able to use descriptive terms such as ‘incredible’ that explain the qualities of a product.”

Impossible Foods said it was grateful the court had supported its efforts to protect its brand “against incursion from a powerful multinational giant.”

READ MORE: Nestlé’s burgers are Sensational and Awesome, but not Incredible (£)

The World Federation of Advertisers (WFA) has launched a guide on data ethics in advertising, designed to help brands use data ethically across their organisations.

The Data Ethics – The Rise of Morality in Technology guide is designed to encourage companies to go beyond simply following the rules on data privacy and recognise the importance of addressing the gap between what they can do and what they should do.

The guide outlines four key principles that should underpin any data ethics approach. The first is that all data usage should respect the people behind the data and companies must use consumer data to improve people’s lives.

Secondly, data usage should aim to be inclusive, acknowledge diversity and eliminate bias rather than dividing groups. Next, brands should be accountable, as consumers expect companies to have open and transparent data practices backed up by robust global and local governance.

Lastly, brands must be transparent and work towards more open and honest data practices, particularly as AI and machine-learning approaches start to automate decisions.

The launch of the guide is backed by a WFA survey of 147 senior brand executives, which finds that 74% of CMOs say data ethics will be more important to their role in the next five years, especially as data privacy issues have risen up the agenda during the Covid-19 pandemic. The survey also found that 82% of marketers would consider leaving their current employer if they felt the approach to data was not ethical.

“The benefits and critical importance of data-enabled tech have been more evident of late than ever before,” says WFA CEO, Stephan Loerke. “But we should not default to an attitude of ‘because we can, we should’ in terms of data usage. The ad industry needs to have a conversation on data that distinguishes ‘the right to do something’ from ‘doing the right thing’.”

Bumble ad celebrates the value of connection during lockdown

Women-first social networking and dating app Bumble has launched a new campaign celebrating the importance of connection during lockdown.

Produced in collaboration with creative agency Mother, the 30-second ‘Time to Connect’ film shows the ways priorities have changed before and after lockdown, contrasting the frantic pace of ‘normal’ life with the slower pace of life during the Covid-19 pandemic. The idea is to show the way people are using this period in their lives to enjoy “deeper and more meaningful connections”.

Research from Bumble found that one in five of its more than 95 million users have been virtually dating during lockdown, with 46% saying lockdown has shown them the reward of spending more time getting to know people.

During lockdown, Bumble has seen a significant rise in the use of its in-app video and voice calling features. In the UK, there has been a 42% increase of in-app video calls since mid-March.

“This campaign is all about reflecting on the many ways our lives have changed and slowed down during these tough times,” says Bumble associate director of marketing, Naomi Walkland.

“Whether you’re speaking to friends, families, or loved ones, connections matter now more than ever. We wanted to highlight how our community is using this time to prioritise what matters most to them, and we hope that this video will remind people of all the great connections they’ve made and will continue to make.”