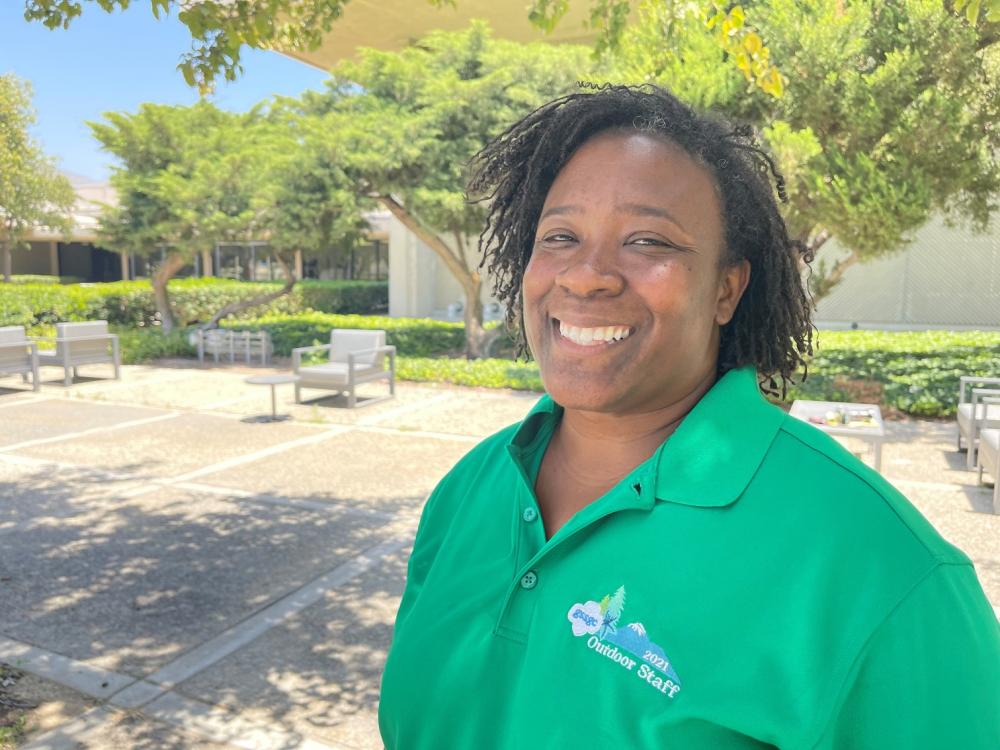 Girl Scouts want to broaden the skills practiced in their programs, and thanks in part to Naval Surface Warfare Center, Port Hueneme Division (NSWC PHD) engineers, they can add cybersecurity to their career aspirations.

NSWC PHD’s junior professionals, or JPs, led mentoring workshops for about 100 Girl Scouts who participated in Cal State San Bernardino’s GenCyber week from June 13-17, designed to provide mentoring for sixth through 12th grade Girl Scouts searching for a cybersecurity career and a university to land for an education. The Girl Scouts belonged to troops based everywhere from Victorville to Temecula.

Four engineers with NSWC PHD taught two mentoring workshops on one of the five days of activities held during GenCyber week. Other activities during the week included flying drones, teaching the fundamentals of cybersecurity and climbing ropes and rocks.

The engineers discussed everything from the starting pay for computer engineers to internship opportunities at the command when they begin attending college.

In a brief slide presentation, Ventura explained how Naval Sea Systems Command (NAVSEA) is the largest of the Navy’s five systems commands, and that NSWC PHD is one of eight surface warfare sites and two undersea warfare sites that NAVSEA oversees in the U.S.

The four engineers also said the cornerstone of their work is test and evaluation. This work involves boarding ships, participating in fleet missile firings and test events, and overseeing radar surveillance, hypersonics and directed energy projects.

The engineers also touched on some of the basics of cybersecurity and its national security importance.

“We are in the middle of it all,” Vladescu told the Girl Scouts. “A big part of what we do is support the fleet, test and evaluation, and work on a ship. We watch all things Sailors do to get around.”

Cayente used a 3D printer from the command to manufacture plastic tokens to represent some of the pillars of the cybersecurity field, such as firewalls, routers, phone switches and other elements.

The engineers also brought along a Cyber Hunter game for the girls to play. The goal of the board game involved trying to find a hacker group before it discovered you. The board game had a grid of 24 spaces with cards turned face down. As the cards were turned over on each player’s turn, a player was asked to answer a cybersecurity-related question.

Questions related to whether it’s OK to use Bluetooth speakers in a secure network, or provide credit card information to unidentified persons. Players moved closer to the “target” card by answering questions correctly. Getting the target card secures the network — and the player wins the game. Along the way, players can lose turns and be prevented from moving through spaces to get closer to the target card. Getting trapped ends the game.

Sharing a love of engineering

Cayente’s interest in the field came about through a Mathematics Engineering Science Achievement program in high school that got him locked into a science, technology, engineering and math (STEM) career pathway for college.

“For girls who study math and science, many don’t apply these fields to programs like cybersecurity,” Sharma said. “But we can explain how math and science connect with engineering and our jobs. It’s good exposure to careers and pathways.”

Ventura sees the mentoring role for the Girl Scouts as a way to help build a larger female workforce in the STEM field.

“It’s important; the job field for women is much lower than for males,” he said.

In recent years, the school’s graduates have taken computer engineering, mechanical engineering and computer science jobs with NSWC PHD and NSWC Corona Division, the latter of which is the Navy’s independent assessment agent located roughly 30 miles southwest of the university in L.A.’s Inland Empire.

Across the nation — after the DHS plug on television — the GenCyber program grew to over 300 similar boot camps with the one at Cal State San Bernardino still listed as the largest to be funded by the National Security Agency, a federal agency that handles eavesdropping for the government, and the National Science Foundation.

Together, the NSA and NSF, which is an independent agency of the United States government that supports fundamental research and education in all the non-medical fields of science and engineering, have bootstrapped Cal State San Bernardino with roughly $100,000 annually in grant money to fund GenCyber week.

“I learned a lot about different concepts related to cybersecurity, like being safe online,” said Isabella, another Girl Scout.

“It was really cool and interesting to have the people come here to teach us about cybersecurity,” said Laura, also a Girl Scout.

“The workshop (with NSWC PHD engineers) wasn’t boring because there were activities where they taught you things about their jobs,” Laura said. “I’m thinking about going into cybersecurity. We need more jobs for women.”

This is the first time that the command has participated in the GenCyber week’s mentoring workshops in partnership with Cal State San Bernardino and the Girl Scouts of San Gorgonio Council, which has roughly 12,300 girl members across San Bernardino and Riverside counties.

In addition, the pandemic caused a hiatus of nearly three years of mentoring activities for Girl Scouts at the San Bernardino school.

The cybersecurity education week dedicated to Girl Scouts began with a telephone call from Claire Jefferson-Glipa, director of diversity and inclusion at Girl Scouts of San Gorgonio Council, to Tony Coulson, executive director of Cal State San Bernardino’s Cybersecurity Center, asking for an hour of support from his school to help mentor Girl Scouts.

“We got to talking and I gave her eight hours,” Coulson said.

“We are trying to get the girls excited about this so that they stay the course in middle school,” said Jefferson-Glipa. “Somewhere along the way girls tend to choose out of math and science because they don’t see the career opportunities.”

The Girl Scouts of the USA, which is the umbrella group over all Girl Scouts, is on board with trying to reverse this trend, and aims to devise curriculum to educate young girls about the basics of computer networks, cyberattacks and online safety.

This work, Warfare Center Mentors Girl Scouts for Cybersecurity Jobs, by Patrick Maio, identified by DVIDS, must comply with the restrictions shown on https://www.dvidshub.net/about/copyright.