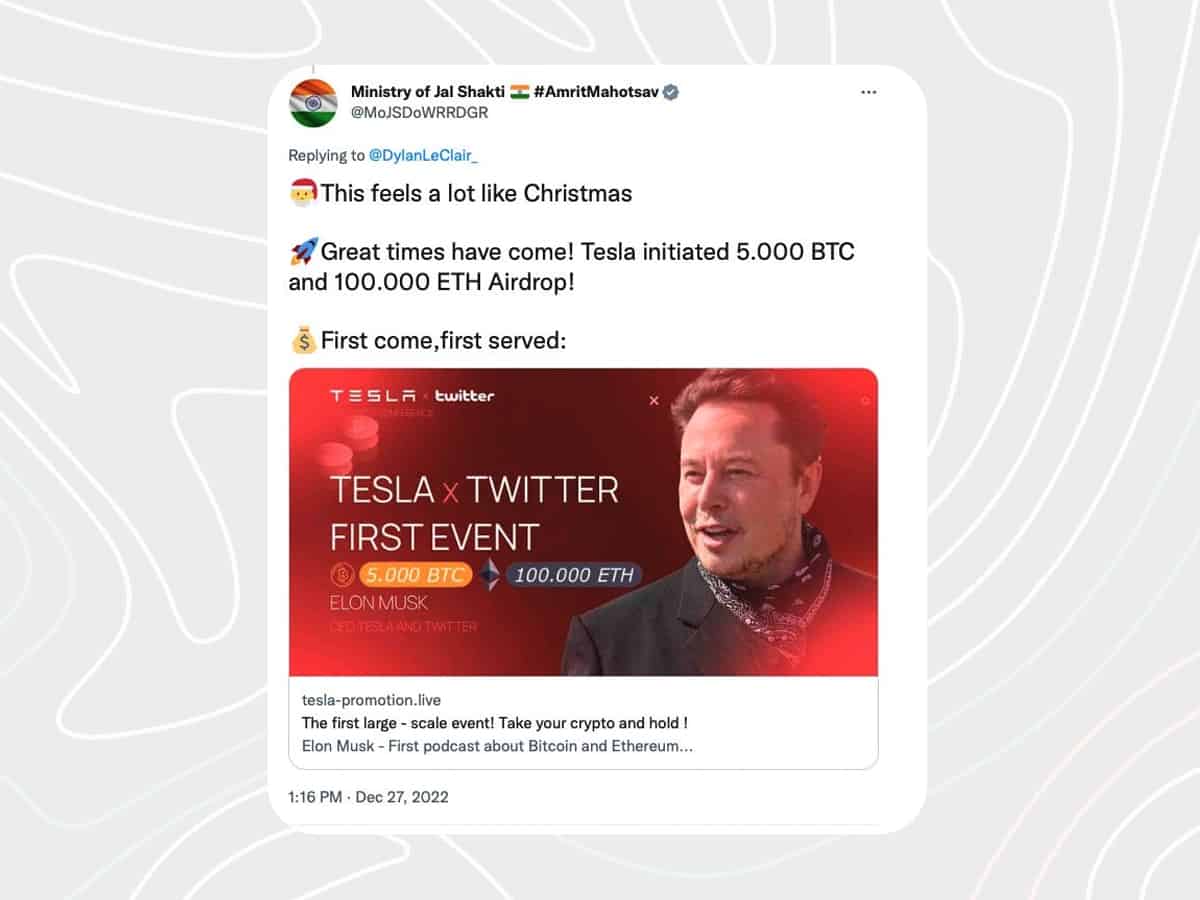 New Delhi: A cyber-security researcher has claimed that the Twitter handle of Ministry of Jal Shakti (Water Resources) was hacked briefly early on Wednesday morning, promoting a fake Tesla and Twitter cryptocurrency giveaway scam for Bitcoin and Ethereum.

According to Satnam Narang, senior staff research engineer at US-based cybersecurity company Tenable, in addition to the hacking of the verified government account, the hackers elevated the reach of the scams by retweeting and liking the post from several bot accounts.

“The website linked in the Ministry of Jal Shakti’s tweet leads to a standard cryptocurrency scam page mimicking the @Medium layout with links to separate giveaway pages for Bitcoin ($BTC) and Ethereum ($ETH),” Narang posted in a tweet thread.

The Jal Shakti Ministry was yet to react to his tweets. The crypto scam tweets had been removed.

The ministry’s account was allegedly used to reply to notable cryptocurrency influencers and news outlets like CoinDesk.

“This feels a lot like Christmas. Great times have come. Tesla initiated 5.000 BTC and 100.000 ETH Airdrop! First come, first served,” read the message, with Musk’s photo, that was posted from the Jal Shakti Twitter account.

“The Jal Shakti account can be seen in the mentions of cryptocurrency influencers and news outlets like @CoinDesk, talking about a giveaway of the two most popular cryptocurrencies, Bitcoin and Ethereum,” Narang said in another tweet.

Officials said that a preliminary probe was initiated by concerned agencies into the hacking of the Ministry’s account. They said that the account was restored shortly and the suspicious tweets from the hacked account were removed.

It came to light when a tweet promoting crypto wallet Sui Wallet was first posted by the Jal Shakti ministry account. Moreover, the account’s profile picture was also altered with Sui’s logo.

Narang said that it would appear that despite the changes to Twitter’s policy with regards to verified Twitter accounts changing their profile pictures and names, “scammers are still seeking to hijack these accounts and use them as-is to peddle these cryptocurrency giveawaysa.