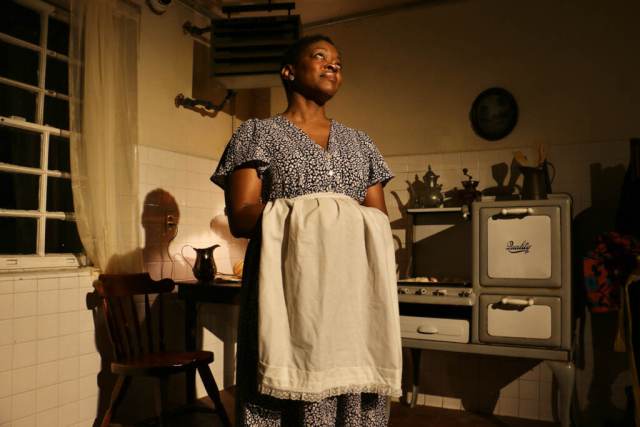 A premiere staging of stories by Langston Hughes populates the grand rooms of an historic mansion in Northeast Philadelphia.

The EgoPo Classic Theater company and Theatre in the X have turned seven short stories from “The Ways of White People,” a collection first published in 1934, into a “promenade” play, wherein the audience walks through Glen Foerd mansion, in the Torresdale neighborhood.

Scenes from the stories are played out inside the mansion’s richly designed rooms with inlaid hardwood flooring and ornate Edwardian trim.

In the kitchen, a Black maid named Cora describes raising her white employer’s daughter after her own daughter of the same age dies, until further tragedy unravels that arrangement.

In one of the bedrooms, a Black violinist who found success playing in Europe returns home to Hopkinsville, Missouri, where he encounters the violent racism he thought he had escaped.

In a parlor off a sunroom, the light-skinned Black man writes a letter to his mother, explaining why he will not greet her in the street anymore because he now passes as white.

“We actually didn’t adapt, really, anything,” said co-director Dane Eissler. “We call it a world premiere theatrical staging, because we’re literally just staging Langston’s words. They are vibrant in and of themselves.”

“You can visually see the words come to life. When you read them, you see the stories,” added co-director Ontaria Kim Wilson. “Which made it easy for us to put it on its feet and introduce it to our actors, because it’s all narrative. We just came in and drew outside of the lines a little bit to maintain the quality of it.”

Primarily known as a poet and founding figure of the Harlem Renaissance, Hughes wrote the stories of “The Ways of White People” in 1933 and 1934 while living on the coast of central California, basing them on his own experiences and those of people he knew.

The stories are not narratively connected, but they are all about conflicts between white and Black people, written from a Black perspective.

Spoiler alert: most do not end well.